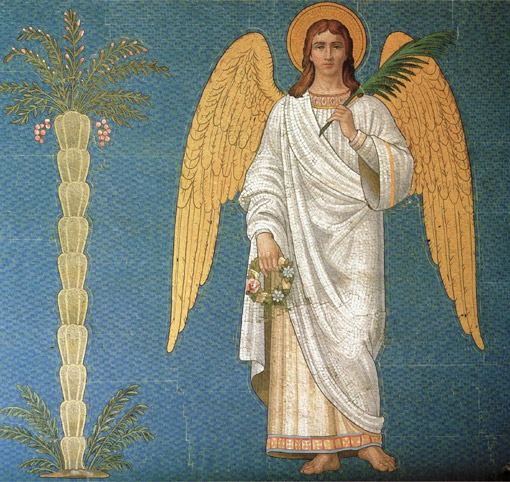 Antonio Salviati, Angel from the portico of the Royal Mausoleum, Frogmore (1862)

For more than a thousand years, until its fall in 1453, the Byzantine Empire, the Christian successor to the Roman Empire in the eastern Mediterranean, stretched across large areas of Europe, North Africa and the Near East. Under successive emperors, the artists, architects and craftsmen of Byzantium (Constantinople, modern Istanbul) worked within a long-established tradition to produce superb buildings and art works of great expressive power. Churches were planned around a central, domed space, and their walls were covered in mosaics showing mysterious, stylised figures set against a shimmering gold background. Subsequent centuries tended to view Byzantine art as stagnant and corrupt, and the style was all but forgotten. From the beginning of the nineteenth century, however, the Eastern city once more began to inspire artists, architects and writers to produce not only palaces and churches, but also paintings, jewellery, interiors and art criticism. Byzantium was revitalised as a new source of inspiration, free from the associations of the other, ubiquitous styles of the nineteenth century: the Gothic and the Classical. This study presents the first coherent account of the varied manifestations of the revival of Byzantinism in Germany, Austria, France, Britain and America. The book is richly illustrated not only with original Byzantine models and the works that they inspired, but also with reproductions from the finely illustrated publications that played an important role in their own right by promoting Byzantium as an ideal. Covering the themes of politics, religion and literature as well as the arts, this book employs the methodologies of cultural history, using the interplay of ideas and forms, in addition to being an account of an influential but little-known artistic movement.

'In four magisterial chapters Bullen gives us the story of the Byzantine revival in Germany, France, Britain and the United States'. Joseph Connors, New York Review of Books.

'A landmark work... the production values of this spectacular book deserve high praise: lavish is the only appropriate word for the illustrations, with more than two hundred wonderfully sharp colour plates. For a work which has full scholarly paraphernalia, including footnotes and bibliography, it will also delight and impress a wider audience. If there is a whiff of the coffee table, it is straight from the shores of the Bosphorus'. Stephen Wildman, Art History.